This fairy tale retelling lives in a mystical world inspired by the Far East, where the Dragon Lord and the Serpent God battle for control of the earthly realm; it is here that the flawed heroine of Forest of a Thousand Lanterns finally meets her match. An epic fantasy finale to the Rise of the Empress novels.

Princess Jade has grown up in exile, hidden away in a monastery while her stepmother, the ruthless Xifeng, rules as empress of Feng Lu. But the empire is in distress and its people are sinking into poverty and despair. Even though Jade doesn’t want the crown, she knows she is the only one who can dethrone the empress and set the world right. Ready to reclaim her place as rightful heir, Jade embarks on a quest to raise the Dragon Lords and defeat Xifeng and the Serpent God once and for all. But will the same darkness that took Xifeng take Jade, too? Or will she find the strength within to save herself, her friends, and her empire?

“Touch my things again and you’ll find insects in your bedding,” he told Wren crossly, having lately discovered her weakness in turn: anything that was small and crawled, which had terrified her ever since a bug crept into her ear when she was a child.

“But why must your shoes always point toward the sunset?” Wren pleaded, unable to bear the mystery of it any longer.

“It’s not the sunset,” Koichi snapped. “They point toward Kamatsu. My father and I do it to honor our homeland.” After that, Wren never touched his things again.

They passed numerous trading posts and caravans full of foreign goods as they traveled. Koichi longed to stop, but Jade urged them on, unwilling to talk to more strangers than necessary. Soon, however, she began to realize that avoiding other people would be impossible.

The snow disappeared and the path became flattened grass as they continued south, passing many others: mothers and children wearing rags with rough cloth tied to their feet for shoes, farmers leading thin, hollow-eyed oxen, and exhausted men carrying crude tools for digging wells. Jade noticed one woman carrying a basket of rice as carefully as she would a baby, perhaps for her hungry family; every single grain counted. No one bothered Jade’s party, but many of the children stared curiously at Koichi.

The day they emerged at last from the Great Forest, the sun shone bright and the air felt mild enough to shuck their cloaks. A vast sea of yellow=green fields stretched out before them, and the smell of sun-warmed grass made Jade long to roll like a child in the fragrant meadows.

“I have relatives here, but we haven’t spoken in years,” Wren said when they stopped to eat one day. “My grandparents left on bad terms. They were betraying our kingdom, some relatives said, even though working for Emperor Jun would pay better than anything here. And they wanted a better life for their grandchildren, so we could be scholars and diplomats’ wives. They wanted much more for us.”

“Why did you choose to remain servants, then?” Koichi asked. Jade  saw that though it was a naïve question from a sheltered upbringing, it was also genuine.

Wren scowled. “Nobody chooses to be a servant. We are servants because we have no choice. Opportunity goes to people of greater social status, like you or your father. Do you think it’s easy to become an ambassador? They want people with family connections.”

Julie C. Dao (www.juliedao.com) is a proud Vietnamese-American who was born in upstate New York. She studied medicine in college, but came to realize blood and needles were her Kryptonite. By day, she worked in science news and research; by night, she wrote books about heroines unafraid to fight for their dreams, which inspired her to follow her passion of becoming a published author. Forest of a Thousand Lanterns is her debut novel. Julie lives in New England. Follow her on Twitter @jules_writes. 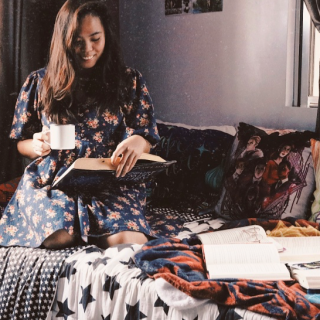 Hey there! I'm Danielle but people known me as Dani. I blog books and other bookish related stuffs and that's I do for fun! I love photography, writing and just staying at home and cuddle with a book.